skip to main | skip to sidebar

Brain IAC have an active petition with the Scottish Parliament Website. It calls on the introduction of a new "Care Category" of Acquired Brain Injury- separate from Mental Health, Physical Disability or Learning Difficulty.
The Parliament’s Public Petitions Committee took evidence from our three BrainIAC witnesses on 9th September 2008 -You can find out about it : Click on LINK HERE.
You can also watch the Committee proceedings on 9th September on Video by CLICKING HERE (The BrainIAC section starts about 1hr 13mins into the 3-hr session!)

The Public Petitions Committee (PPC) met again on Tuesday 19th May 2009 (postponed from 31st March) in Parliament to consider responses expected from two organisations invited to submit comments. In the event the Committee only took a few minutes to note that no comments had been received; so the Committee agreed to again write to the Scottish Government and the Association of Directors of Social Work seeking responses to specific points. Both these bodies have been asked to respond by 21st August – so clearly the next PPC meeting will not be until September or October 2009 – painfully slow progress!

In the meantime BrainIAC had already responded to the Scottish Government’s previous letter:

Link to index of all Comments & Letters submitted: – (http://www.scottish.parliament.uk/s3/committees/petitions/petitionsubmissions/sub-08/08-subIndexForPE1179.htm)

WATCH THIS SPACE for date of the next PPC Meeting .

On 19th April HelenM , this time accompanied by Ross and Michael (both staff in the Griffin Bar, corner of Bath and Elmbank Streets, Glasgow – opposite the King’s Theatre), completed another sponsored abseil 165ft down from the Forth Rail Bridge onto the shore at South Queensferry to support BrainIAC’s and Momentum’s funds – mind you, after last year’s abseil Helen said she "would NEVER EVER DO anything like that again" !

Sponsorship monies for the event are still coming in. 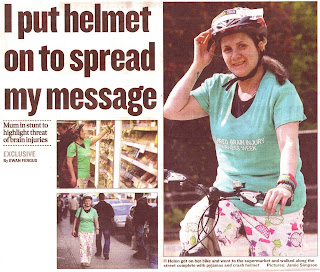 A Glasgow mum spent a whole week dressed in pyjamas and a crash helmet. Campaigner Helen Moran performed the stunt to raise cash and awareness of brain injury. Helen was the victim of a brain injury herself when she sleep-walked out of her bedroom window and fell 30ft.

Helen said: "People come up to you and say 'you're in pyjamas, what's going on?' I tell them it's for brain injury awareness week. You do get some funny looks, but I don't care.”

Helen added: "You can, at the moment, legally get on a bike without wearing a crash helmet. I don't agree with that. So many brain injuries are caused in bicycle accidents. There should be a change in the law to make it illegal."

MSP Paul Martin, who is a member of the committee, told the Evening Times: "Helen has done an excellent job raising awareness of her organisation. It's extremely important that we recognise the real challenges that people who suffer brain injuries face."

All the week our Helen wore the helmet and pyjamas

to raise funds for

Yet again we say:

Again, monies for Helen’s dressing-up activities are still coming in.

asking the UK Government to introduce

In the last 3 years, Department of Transport fi

gures say that the number of cyclists killed or seriously injured on UK roads has increased by 11%.

Children make up a disproportionate number of the victims.

If you want to find out more and sign up, then go to:

BrainIAC had the opportunity to operate a stall exhibiting a variety of information about our organisation and more generally about Acquired Brain Injury and its Awareness within the Scottish Parliament building at Holyrood. Positioned up on the same level as the debating chamber, we had quite some number of ‘passing traffic’ (especially MSPs on the final day) who were interested enough to stop and enquire about us and the general subject. 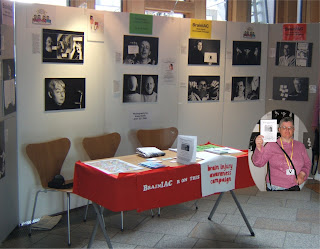 We had a variety of helpers on a day-to-day basis, who included Neill_S, LorraineK (see inset image above), MarkZ, AlanA, and, of course, the ubiquitous HelenM.

After dismantling the stall, MarkZ about to ‘take off’ through the Edinburgh streets with (or was it without?) HelenM’s ‘Pink-a-Dink’ suitcase containing all our pin-up exhibits.

Overall, this event was well worth doing,
and allowed us to make some useful contacts.

Please come along and hear what’s been going on. HOPE YOU CAN MAKE IT.

As shown on the attached map, The Hub is close to Headway Glasgow, but if you are coming by train to Charing Cross, then when you come out from the station onto Bath Street then turn the other direction (LEFT) and the Venlaw Building is immediately on your LEFT. 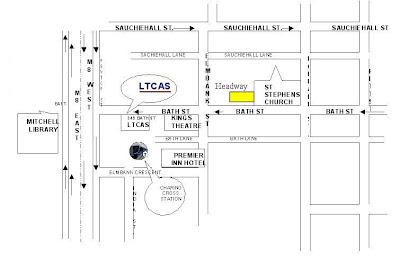 HelenM is doing a sponsored abseil down the Forth Rail Bridge on Sunday 5th October – in aid of Momentum and BrainIAC funds. She will be abseiling down onto the beach at South Queensferry – her start time is 11.15am. BrainIAC members and other friends are encouraged to sponsor her - contact HelenM here,

Brain Injury Awareness Campaign
Glasgow
The Brain Injury Awareness Campaign is a group of people with their own individual stories, who are all on the same mission- we want to improve things for the future because we are the ones who know. Brain Injury affects 3500 people per year in Glasgow alone and we know that Brain Injury doesn't discriminate- it can get you whenever, wherever and whoever you are. It's such an isolating thing- a whole new world, your life as it was has changed- drastically. By our experience we know what improvements we want to see. Join us to help do this. serviceuserforum@gmail.com